Erasure – Light At The End Of The World 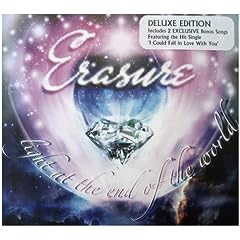 Andy Bell and Vince Clarke of Erasure return for their 11th original studio album, "Light at the End of the World." Although this new album may not contain songs as strong as some of their past glorious hits like "Oh L’amour" or "Chains of Love," this album of mostly uptempo and very danceable songs portrays classic Erasure with Vince’s exquisite programming, addictive basslines, and catchy keyboard solos to go along with Andy’s beautiful voice, which sounds as great as ever, that pretty much sings tales of love and of the joys and of the pitfalls of relationships that personifies Andy’s trademark lyrical writing style so well.

"Sunday Girl," the second single, begins and lays the ground work quite beautifully for the electronic bliss of this album. This is an uptempo song that starts out with the main synthline and comes alive with driving beats and with Vince’s bleeps and bloops that float over the music that appears and suddenly disappears in the bridge of the song.

"I Could Fall in Love with You" is the second song and, very deservedly so, the first single for the album. The title itself and its lyrics exudes the classic Erasure love imagery, and the uptempo song has one of the best ever Vince synth hooklines that opens and ends the song and appears in the chorus, as well. Vince again comes through with his programming wizardry by popping in and out very quirky yet enjoyable synth sounds throughout the verses and the chorus of the song. This is my favorite song on the album.

In the third song, "Sucker for Love," Andy sings,"I’m a sucker for love/all that’s artificial." This line describes the song so perfectly for it is as sweet and artificial as Splenda. This is a very uptempo song and is probably the most high energy song on the album.

The album slows down a little for the fourth song, "Storm in a Teacup." The song begins with a Pet Shop Boy Chris Lowe-esque underlying smooth synthline that carries the song throughout along with a faint, midtempo driving beat. In the chorus, a beautiful whirling sound hovers over Andy’s voice. The lyrics are autobiographical that detail how Andy grew up with an alcoholic mother and how he left home in search of a better life and fame as a teen.

"Fly Away," the fifth song, is another midtempo song with a bouncing bassline. Erasure fans know that Andy has referenced angels in songs like "Heavenly Action" or how he wore angel wings for the "Nightbird" tour, and these angel wings or maybe a belief in angels may have really influenced Andy because this song is the first of three songs on the album that references angels. Speaking of which, the chorus is quite angelic with heavenly backing vocals that support Andy when he sings, "And I cry/and I cry." There is also a very memorable but short-lived Vince keyboard solo.

The sixth song, "Golden Heart," is a straightforward, uptempo, and very likeable synthpop song. My favorite part of the song is the buildup and crescendo of (what seems like) live drums that add a nice counter touch to the electronic sounds of the song.

"How My Eyes Adore You" has a fat bassline and hip-hop/R&B beats with soulish vocals for the seventh song. Another very nice and catchy Vince keyboard solo appears in this song.

For the eighth song, "Darlene" is a midtempo synthpop song that contains a beautiful (and my favorite) vocal line, "You got your religion/I got my addictions."

"When a Lover Leaves You," the ninth song, is another favorite of mine. It has a very uplifting, feel good, and positive vibe even though one wouldn’t expect the song to be so positive with a contradictory and perhaps negative song title. The angel reference is continued in this song.

The tenth song and album closer for the regular edition album, "Glass Angel," has a haunting and dark mood with a strong sense of urgency in the music and in Andy’s voice. To me, this dark song is quite a surprising pick to end the regular edition due to most of the previous songs on the album being mostly positive and upbeat.

However, for those that bought the limited edition album, the first of two bonus tracks and eleventh song, "Be My Baby," gets the album back on track with a very uptempo beat and has a slight disco flare with a fat bassline that pulses throughout the song. Like "Storm in a Teacup," this song should get your body moving.

The second bonus track and the twelfth and last song, "I Don’t know Why," ends the limited edition album in a not so surprisingly uptempo fashion. I love how they layered Andy’s whispers against the main vocals in the second verse. This is yet another song to get you to dance.

This solid electro album is a must have for fans of the older and of the newer Erasure, as well as for synthpop fans who’ve yet to discover the incredible duo of Erasure who’ve blessed the synth scene for over 20 years, and contrary to what T.S. Eliot wrote, if this album represents the light at the end of the world, the world will end with a bang and not with a whimper.