Geschätzte Lesezeit: 7 Minute(n)
On tuesday November 6th, some months after releasing their second album "Ten New Messages", THE RAKES played a gig at Zeche Carl in Essen (Germany) and Sparklingphotos.de had the chance to talk to Matthew Swinnerton (guitarist of The Rakes) about their history, the now and plans for the future. 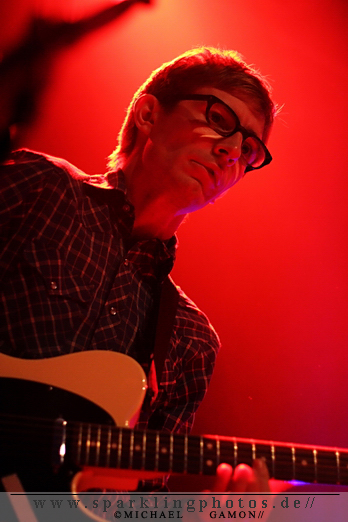 How did the four of you meet and how long was the way from a fictional idea of founding a band to actually doing it in the end?

Well, if you play guitar like I was doing since I was maybe 15 or 16, the idea is always there to the ideal of perhaps doing it one day professionally playing in a band. It’s only when you meet the right people that you start to actually really consider it. I think when we first met 4 years ago, two of us had been in bands before: myself and Jamie the bass-player. Alan (singer) and Lasse (drums) have not been in a band, but  we had a connection just after rehearsing with a guitar, bass, drum and someone singing over it. There was a certain uniqueness there, something specific to the sound, so that we quite early knew. You know, in London you have the posibility, you got the right sound, there are lots of bands, so it doesn’t feel like that distant a dream. It’s still very difficult, but maybe if you live in a countryside somewhere, it’s a bit more difficult to have this. Living in London helped that.


What are your influences besides the obvious bands such as David Bowie, The Strokes or maybe The Buzzcocks with whom you have already toured before?

Yeah we toured with those guys and you pick up influences along the way really. When you play with different type of bands weather it’s bigger bands like Franz Ferdinand or you have a support band in a particular town that you listen to, you always keep your ears open if you are a musician. It’s about developing the sound and you can take it from anything like a film soundtrack or a film that you bought. It’s not all about musical influences really.

So what are your favorite bands at the moment or of all time?

Personally I like The Fall quite a lot or listen a bit to LCD Soundsystem, Stereolab or Gonzales’ "Solo Piano", which is one thing I have been listening to recently.


After working with Paul Epworth (producer for Bloc Party, Maximo Park, Kate Nash etc) on your debut "Capture/Release" you have changed the producer for your follow-up album "Ten New Messages" and this time, Jim Abiss (Editors, Arctic Monkeys) and Brendan Lynch (Primal Scream) worked the controllers. What changes were you hoping for and are you satisfied with the way it was actually converted on tape?

It is always that when you have certain ideas about how a song will sound, it’s always a whole process that it goes through. Along that process from being written to produced, certain elements come up that you hadn’t considered before, so a good producer could be someone that knows and identifies the points where things are coming alive. And I think we just worked with those two guys because they heard the stuff, they were keen to work with us after hearing the demos. It was something we just went into really, we didn’t do a lot of reasearch about the producers. You know very early on we worked with Paul Epworth on our demos and very early songs. So the more experience you have in the studio, the more you understand the process on how putting together a record works. And now we worked with Jim Abiss, who had great hit albums with Arctic Monkeys or Kasabian and Brendan Lynch, where we really liked the record "Vanishing Point" he did with Primal Scream.

If you would have to describe your two albums, what are they like and how do "Capture/Release" and "Ten New Messages" differ sound- and lyricswise?

I think the first one is more from about 10pm in the evening when the pubs are just very lifely and you sort of stumble out of the pub and then the next one is a bit more of a reflected record so it’s a bit more early out perhaps when the sun is coming up. So one is more a nighttime record and the other more reflective in the light of day seen. 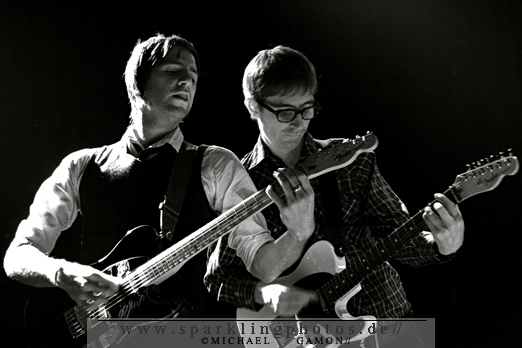 Besides your musical output, you are also known for having a distinct dress-style. But how did the long version of your song "The World was a mess but his hair was perfect" end up as the soundtrack to Dior’s Homme Fashion Show?

We wrote it for this show. We were playing a very early gig in East-London when we were obviously still in our day-jobs and this guy saw us play there and he was the designer for Dior. At this point we didn’t had a real record deal and barely had our first single out on a small label and he like the sound and look of the band and the attitude I think and he wanted to capture some of that for his show. He was looking at a lot of London bands and I think he liked the englishness of The Rakes. Something tells me he enjoyed our social commentary in the lyrics perhaps. So actually he wanted this song written and we really just wrote a normal "Rakes song" and extended it to over ten minutes. But we did consider things like how fast the people will be walking down the cat walk but really the idea was -Alan put together these lyrics- a little bit satyrical, taking a bit of a swipe at the fashion world and it’s sort of nevermindedness as it only attached itself to politics or a certain cause if it’s fashionable. It is just ruled by fashion. So it’s quite a negative portrait of the fashion industry. So to slip that in there was a bit of a coup really, a subversive element to the song.

How was that received though?

To be honest I don’t think that the fashion people were really listening to the lyrics part when it was played and so I think it was only afterwards that this sort of came to life, but the designer wanted it because he is not necessarily just a person of the fashion world. He enjoys music and art as well, he is actually a photographer in his own rights. He is not that typical type of a fashion character, so I think one of the reasons he wanted The Rakes to do the song was to have The Rakes’ interpretation of it.

In the video to "The world was a mess but his hair was perfect" you are cutting your fans’ hair. Did anyone sue you afterwards? 😉

No, luckily not. It was the magic of cinema. Let’s put it that way: Special Effects. There was a professional hairdresser on standby at all times, just in case that The Rakes’ hairdressing was not quite perfect.

It is known that you found the guest artists (Asian Rapper Raxstar and London-based singer/songwriter Laura Marling) for your song "Suspicious Eyes" on the social network site Myspace, how important are platforms like this for a band these days and are fans able to reach you personally via your site?

Obiously in the time that we have been in a band, the music industry has changed a lot and these Myspace or other platforms for musics accessabilities are good, because it does give a certain network of associations and for example I myself would look up different bands on myspace etc, because it is a good way to get a taste of the songs and for bands to keep a degree of contact with the fans. But then again you don’t want it to be too transparent because I think it’s sometimes good to have an area of mystery around the songs. So it’s a difficult thing to judge as definitely good or definitely bad, but it has definitely helped us to reach people. Like when we play in Brasil, people have heard of us either through fanzines or traditional ways of how music gets transfered, but also through these sites.

But you do yours yourself?

Yes we do, mostly Lasse, our drummer does. 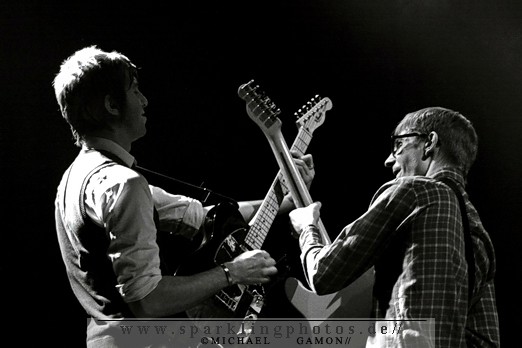 You do a lot of touring and have already supported bands like Franz Ferdinand, The Buzzcocks or Bloc Party. How does music vary being on tour from being in the studio and what do you like more?

There is a difference, because on the one side, the live element is all about the energy and the performance in the moment. In the studio you obviously have a little more time to consider the way things are put together. I would say that in the studio it’s all about letting ideas out and then being selective, forming and channeling the best things into the song. It’s very difficult to record the energy of a band because the environment is so different. We maybe not yet suceeded in capturing that total energy on record, but that’s the challenge we are up to for the third record.

After touring Luxemburg, France, Switzerland, Austria and the Netherlands last month, today is the last date of your little tour through Germany before there will be the offcial tour-ending in London on thursday night. How have the reactions been so far on your tour and are there any differences in The Rakes fans in germany or other counties of the world?

That’s a lot of places and we had a fantastic tour. Last night Berlin was great, Berlin is a favorite city of ours to go and play and the crowd there is always responsive. When we come to places like we are today, or we played a gig in Bielefeld early on the tour, and in these places where we had never been before, you obviously have a new audience to present yourselves to and it’s always a slightly different thing, a different approach. But as I said, the energy is the most important thing about a gig and that’s what we are trying to do no matter where we play, weather it’s the fifth time or the first. We did a gig in Vienna on Halloween and we wore some capes and masks and that was very fun.
.

But are the fans different here than they are in other countries?

I think it sometimes depends on how quickly people will start jumping around in the moshpit in some countries. In germany so far, especially Frankfurt and Berlin, it’s been very quick to get going, but I couldn’t really pick out any particular difference about the audiences.

Thank you Matthew for the interview. Have fun on stage and enjoy the rest of your tour.